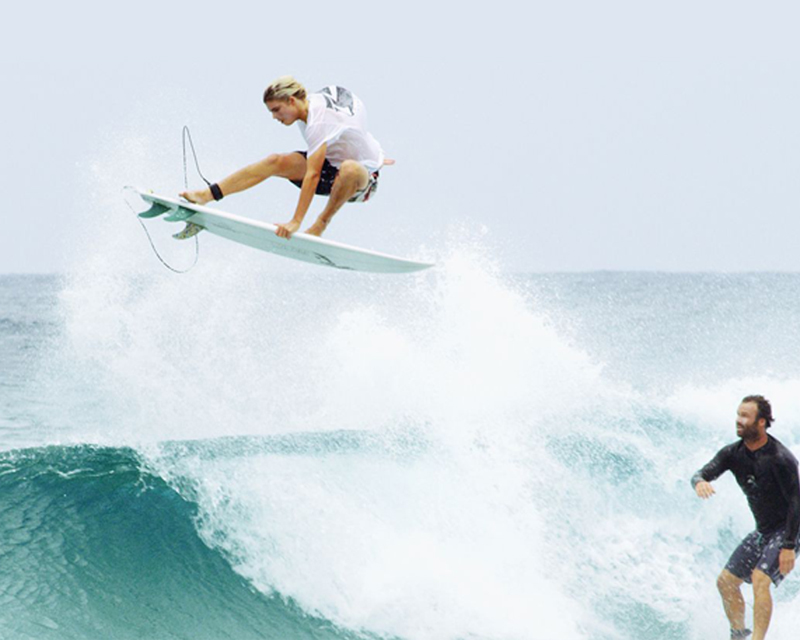 Rusty Preisendorfer is the creator of the Rusty Surfboards brand. Well known in the surf industry for more than 20 years now, the famous surf brand dominates the scene of manufacturers of shortboards and other types of high-performance surfboards. Rusty designs the manufacture of tools cut to perfection to scorch the most beautiful waves in the world.

THE STORY OF RUSTY PREISENDORFER

Rusty started surfing late, at the age of 13 when his family moved to La Jolla in 1966. He was amazed at the cover of the famous Surfer magazine! The picture depicted Dickie Moon surfing the spot in Blacks, California. It was the electroshock and Rusty Preisendorfer decided!

In its early days, the local beach of La Jolla shores was dominated by a group of older surfers. They were not very tolerant of newcomers. Despite his young age, Rusty could not integrate. He decides to surf a few kilometers north of La Jolla, on the famous spot of Blacks, at the time very little frequented.

In 1966, an important event took place, the World Surfing Championships in San Diego. At the time, longboarding was in vogue and the competitors were all surfing long boards. But at this event, a young Australian, named Nat Young, bluffed everyone by surfing a shorter board. This board allowed it to have tight and radical curves that were quite exceptional for the time.

In the meantime, Rusty bought his first board, a shortboard that he found in one of the surf shops in his city. Spring 1968 marked the shortboard revolution. A radical change, everyone wanted to surf a shorter, more manoeuvrable and less cumbersome board. Some pioneers went bankrupt while a host of new shapers specializing in shortboards appeared.

During a session like any other at Blacks, his favorite spot, Rusty meets Gary Keating, a charismatic surfer and emblematic of the Californian region. He offered him sponsorship at Gordon & Smith, the leading brand at the time.

Rusty Preisendorfer joins the G&S team for which he wears the logo when surfing, but also in the shape rooms. It was at this time that he was trained by Larry Gordon. He is improving quickly, able to assimilate most of what the pro-surfers wanted to find in their surfboards.

In 1974, Rusty went to Australia for the first time. There, he befriended Peter Townend and learned a lot about surfboard culture in Australia. He discovers how short boards work.

On his return, he founded Music Surfboards and left Gordon & Smith to set up his own business. He then decided to stop everything and resume his university studies in Physics and Chemistry.

Shortly after, surfing caught up with him. He became a judge for some local competitions, before being contacted by John Durward to create and shaper the Canyon Surfboards brand. Rusty accepted and started making boards for many surfers of the time. He found himself providing boards to Randy and Wes Laine or David Barr as well as some Australian surfers like Peter Townend and Ian Cairns.

In January 1981, Shaun Tomson, the world champion from South Africa, asked him to make some surfboards for him. Thus, Canyon Surfboards signs a licensing agreement with Tomson that enhances the shaper's reputation.

The following year, Rusty met Mark Occhilupo, a young Australian prodigy then 15 years old with whom he would team up for many years. Rusty Preisendorfer then left Canyon surfboards to finally build his brand. At first he practiced without a logo and had difficulty getting by. It was then that his friend, Peter Townend, suggested that he create his logo so that people would recognize his work. This marks the beginning of Rusty Surfboards and its famous logo: the "R-Dot".

The Rusty Surfboards team is now composed of young talents such as Lucas Silveira, Pama Davies, Letty Mortensen, Kevin Schulz, Jojo Roper and Jamie Sterling. Rusty Preisendorfer has also surrounded himself with 5 shapers, including his son, in his new studio in San Diego, California. He has the precise mind and patience of a technician, something that is reflected in the shape of his boards that transformed professional surfing in the 80s and 90s.