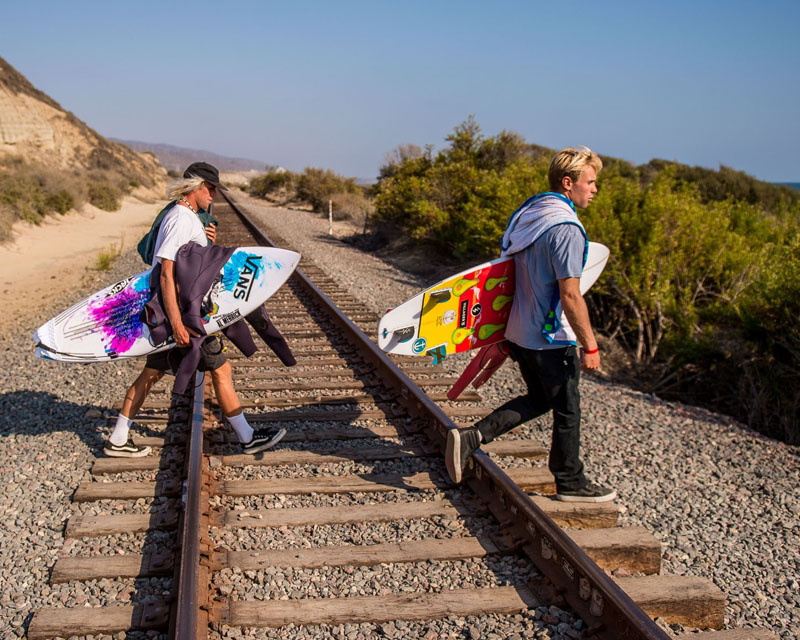 In the surfing world, Al Merrick is an iconic shaper. He has built a solid reputation over the years through good quality and high performance products. He has also been a part of the success of many great surfers. Being a surfing enthusiast himself, he is able to better understand the needs of surfers

Today, he continues to innovate with many models of boards shaped to the millimeter with a worldwide reputation. Channel Islands surfboards is now a family business that has lost none of its notoriety.

THE STORY OF AL MERRICK

Born on March 11, 1944, this shaper spent part of his childhood in New Jersey. Initially, he resided in Bradley Beach, then his family moved to Florida and finally to California. Al Merrick started surfing when he was only 10 years old at the Encinitas post. He surfed for Hawaii Surfboards at that time.

Already at that time, he helped John Price, another shaper, to develop a noserbride. In 1966, also inspired by Dick Brewer, he bought a planer and got to work. Having moved to Santa Barbara a year earlier, he witnessed the exploits of Bob MacTavish. It was 1968 and MacTavish was at Rincon testing new equipment.

That was the catalyst and Al began making boards in small production runs for his family in 1969. It was on one of his creations in 1977 that Shaun Thomson won a world title.

Nevertheless, it is the famous Tom Curren who will make known this talented shaper. Still young at the time, Al took care of all his boards during his career. Fame knocked on their doors in 1982 when Curren turned pro and Al's Islands label followed.

This propulsion won over other surfers who all wanted to excel like Tom. From then on, they flocked to Al to surf the same boards as Curren.

Names like Dane Reynolds, Lisa Anderson, Kelly Slater, Taylor Knox and many others. From local company to global organization, it's been a long road. Today, Al's son, Britt Merrick, follows in his father's footsteps with the same passion and dedication.

Before we get into the new Channel Islands surfboards, let's talk about Tom Curren's model. It was his board that revolutionized the way he surfed and seduced so many surfers. This equipment gave him a pressure all along the body with the leg back at the time of the turns.

The brand's boards were made with a double pump at the bottom and a Rincon spool. Also, all Channel Islands models have a stable grind with precise subtleties. Al had to use epoxy and now excels in carbon strips. Among the popular models, there is a short, stocky version, Deep Six or Wizard Sleeve.

There is also the Dumpster Driver, the Fishbeard and the Proton. The Proton board was named "Best Board" in 2007 and is still going strong. Getting back to the current hot models, there is the OG Flyer. The OG Flyer is a classic revisited to offer more versatility and is one of the most surfed boards of the brand.

You also have the CI FISH, a very popular twin. The CI FISH is an update of the Retro Fish designed for today's surfers. Among the little nuggets of the brand, you will also find the Black & White board which benefits from a refined design and many other models. The shape of each board meets current safety and construction standards with various structural variations. There are high and low rocker boards.

There are also boxy, pinch and mid boards and squash, pin and round tails. Each variation has its advantages and also its limitations, especially for re-entry sections.

In addition, the brand remains attentive to the needs of surfers and accompanies each of its creations with ever more innovations. Fish lovers will also be happy with a wide range of retro boards.

With Channel Islands surfboards, the boards are made by surfers for surfers. Innovation is present in every creation to provide a custom board for surfers. Al Merrick's label focuses on all types of surfing, from the most basic on small summer swells to the most risky in the heart of the tubes.

Since the beginning of the adventure in the late 60's, the reference in surfboards has remained faithful to its objectives: to offer quality boards to improve the fun factor as well as the performance of users.

After the manufacturing of each board, tests are carried out on site to attest the quality of the products.

Each part of the board determines the speed, the attitude in the turns, the grip in the re-entry sections and the evolution of the surfer's level. From the fin to the tail and all the other parts of the board, each element is designed and adapted to each level.

Shaping remains the main activity of Channel Islands, they have also developed a range of accessories. Thus, for each board, there are always accessories for a better drive and an optimal safety. Thus, in the Channel Islands surfboards catalog, it is possible to get very powerful HEX CORD leashes.

There are also caps, board bags, backpacks, umbrellas and board covers. But the must-have accessories are the pads with signature models from big stars like Dane Reynolds.

The brand also works with surfers to collect their opinions and create custom boards on demand.

They take care of marketing these items throughout the world. Channel Islands surfboards has seen generations of talented surfers come and go and continues to deliver high performance equipment.