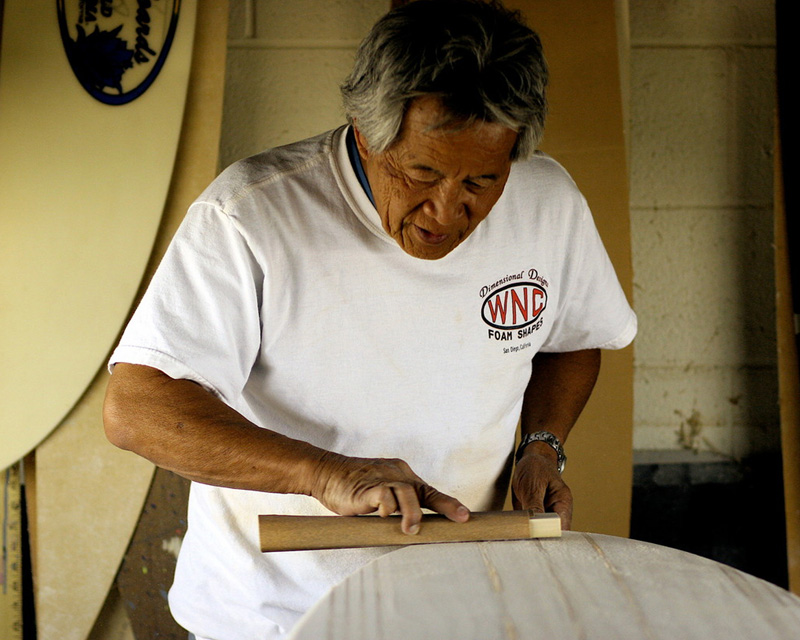 Donald Takayama is from Waikiki. He was raised in Honolulu. He started surfing at an early age and was a young prodigy. Takayama is known for its technique and sliding style, but also for its surfboard brand.

THE STORY OF DONALD TAKAYAMA

Takayama was born a surfer, from kindergarten onwards, he practises sport with incredible ease. As soon as he started school, he dries classes to surf the Hawaiian waves with a board that is far too heavy and made from railway ties. His board was so heavy that he couldn't take it home after each session, the child would bury it in the sand to pick it up the next morning for new waves.

At the age of 12, Takayama bought a plane ticket to California with his pocket money. He literally came to Venice Beach with $10 in his pocket. Very quickly, he approached the workshops of Velzy and Jacobs Surfboards where he was housed in a cardboard box.

He works a few years in the workshop helping as much as he can, learning to repair the boards as well as the shape technique. Some time later, Velzy and Jacobs decided to go their separate ways and Takayama found himself in Jacobs Surfboards' new workshop. The young prodigy then developed his shape and began to make his own board models for renowned surfers such as Mickey Dora and Lance Carson.

In 1965, he launched his first Longboard model under his own name. The following year, he joined Bing Surfboards and designed his very first Noserider, before leaving to work with Weber Surfboards.

THE YEARS OF COMPETITION OF DONALD TAKAYAMA

Between 1966 and the late 1970s, Donald Takayama took advantage of his free time to participate in local surf competitions. In 1966, he finished 3rd in the United States Surfing Association. Donald Takayama developed a surfing style of his own, he had an arched posture, a small height and good reflexes. He was particularly known for the "arch soul", a position that consists in going to the nose of his board and bending backwards with both arms towards the sky.

Donald Takayama quickly reached the top. He won the American Championship Masters three years in a row from 1971 to 1973. After a career of pro surfer crowned with trophies, he decided to devote himself to the shape and design of surfboards. At the end of the 1970s, he founded the Hawaiian Pro Designs brand.

Against the trend of trends and short boards, Takayama stands out by almost exclusively producing long boards. The popular models of the time were the David Nuuhiwa, a Noserider, and the Dale Dobson.

In 1985, Takayama was suspected of drug trafficking. He was arrested and taken to a federal prison where he was serving his sentence of just over a year.

When it was released in 1986, it was exclusively dedicated to the shape. His longboards quickly became legendary thanks to the rise of the young prodigy Joel Tudor, who surfed under the Hawaiian label.

Teaming up with the world longboard champion, Takayama's boards are attracting widespread interest and are quickly being sought around the world. It is also a success with surfboard enthusiasts and frenetic collectors.

At that time, Takayama was almost exclusively dedicated to the manufacture of longboards, under his Hawaiian label. Its new designs were faster and easier to handle, and technological advances allowed the shaper to innovate constantly.

For Takayama, the longboard allows the less experienced surfer to surf more easily, this gives the older surfer the chance to be initiated easily. Today, entire families surf on a longboard, not for titles or glory but only for fun.

Donald Takayama died at the age of 68 of a heart attack. He has climbed to the top over the years and is still a legend in the surfing world, especially in the longboard scene. Its flagship model is the In The Pink, which has been voted best board of the year several times. A reference brand, which offers efficient, manoeuvrable and fast shapes.